“For as long as I have been interested in history, I have been fascinated by the person of Kaiser Wilhelm II. The first likeness of the Kaiser I can recall seeing – and one which appealed to my other hobby, cartooning – was Sir John Tenniel’s “Dropping the Pilot”, reproduced faithfully in Modern Times, an old (and heavily defaced) textbook belonging to my mother.”[1]

I remember debating whether or not to begin my BA Honours thesis in such a fashion – personal, reflective, using the dreaded ‘I’ – before deciding ‘Ah, what the hell – I’m being honest’. And it’s true, that book, Modern Times, is in many ways the whole basis for my chosen profession, and for the direction in which I have gone. Focused on ‘modern’ history, defined as ‘The French Revolution to the Present’, Carlton J. H. Hayes and Margareta Faissler put together a terrific textbook for the Mainstreams of Civilization series published by Macmillan, in London, but also by its US and Canadian counterparts Collier-Macmillan, for distribution in North America.

I remember during my early teens (c.1990-1995) reading and re-reading Modern Times from cover to cover; skipping ahead to my favourite chapters (‘The Conservative Restoration’ and ‘Germany, Italy, and Austria-Hungary, 1871-1914’); and tracing the maps, 35 of them in-all, and all lovingly-rendered in black and white, shades of grey, and an odd shade of camel/brown. After ten-or-so pages of lucid, straightforward text, there were sections on ‘Persons and Terms’, key words and concepts to remember, like ‘William II’, or Kulturkampf; study questions ‘To Master the Text’, ‘To Interpret the Facts’, and ‘To Put this Chapter in a Larger Setting’.

The interplay between illustrations and the main text is still, I think, unsurpassed in similar books, and writers of academic monographs would do well to learn from the example of Modern Times. The cartoons made sense in context; so too did the woodcuts and photographs of everyone from Disraeli to Marx. About the only thing missing was much about ‘The World Outside Europe’ (the title of a chapter, pp.413-427).

I still have mum’s copy on my shelves at work, and refer to it often; with her ever-so-precise name ‘Gillian Cain’ written on the front page, and her hilarious doodlings of King Louis Philippe on p.140 (‘Gill Cain, yu should be studyen, yu moron!’; ‘OK, Punk – are you de dirty brudda who killed my rat?’, etc…). 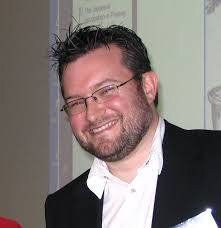 Richard Scully, Associate Professor of Modern European History, University of New England. Born in Melbourne and educated at Xavier College (1991-98), Richard discovered an early passion for History (and Doctor Who, before it was cool). He studied at Monash University (1999-2003), where he was awarded the Ian Turner Memorial Prize for his BA (Honours) thesis (2003) and the J. D. Legge Prize for the best overall result in fourth-year History (graduated 2004). While studying for his PhD (awarded 2008), Richard worked as a sessional tutor, Associate Lecturer, and Lecturer, in History and International Studies. He came to the UNE at the beginning of 2009 as Lecturer in Modern European History, pursuing his interests in teaching the 1789-2000 period, and his main areas of research interest (the cultural history of Anglo-German relations; the Great War; and the political cartoon). In 2012, Richard was awarded a DECRA (Discovery Early Career Researcher Award) by the Australian Research Council, to explore the global history of political cartoons (funding for 2013-2015 inclusive). In 2014, Richard was Visiting Scholar at the Flinders University of South Australia, and was also accepted as a Visiting Scholar at the University of Cambridge.