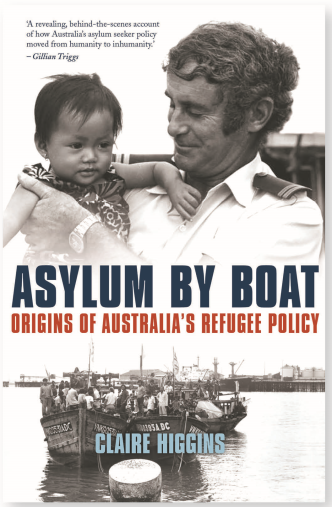 I completed my DPhil in History January 2014 at the University of Oxford. I am now a Senior Research Associate at the Andrew & Renata Kaldor Centre for International Refugee Law, UNSW.

When I started the DPhil in 2009 the archival records of the Fraser government were only just becoming available. I was very fortunate to be able to combine these records with oral history interviews with Mr Fraser, former Ministers for Immigration and former Department of Immigration staff, as well as a rare and special find – the records of the UNHCR legal adviser in Australia at that time. By combining these sources, I worked to dig into the policy-making process, and reconstruct the procedure under which asylum seekers were received and processed. My DPhil was supervised by the brilliant economic and social historian, Professor Deborah Oxley, and she taught me how to analyse the data in the UNHCR files using quantitative methods; as a result, (and for the first time) we can estimate the ‘recognition rate’ for refugee status among asylum seekers coming to Australia during the 1970s and early 1980s.

I’ve augmented the book with much more detail from Australian government archival records, and wrote the manuscript almost from scratch, changing the tone from an academic thesis to a more accessible history.

Australia has international obligations to treat people seeking protection with humanity and dignity. When I began studying to be a historian in my undergraduate and Masters degrees in the early and mid 2000s, Australia’s asylum policy and debate were becoming increasingly harsh. So when I started the DPhil I wanted to understand how policy had gotten to this point.

Through my research I found that the same policies that are in place today – boat turnbacks and detention – were proposed within the Department of Immigration and Ethnic Affairs in the late 1970s, but were considered ‘a challenge to our humanity’ by senior figures in the department, and rejected by the Minister and by Cabinet. Instead, the government issued press releases that described asylum seekers arriving by boat in human terms, giving details of their families, their professions and the hardships of their journeys.

3. What are you researching now or intending to do next?

Now that the book is published, my next research project focuses on pathways to protection, what are sometimes called ‘orderly departure programs’, or ‘protected entry procedures’ – essentially, the ways in which a State enables asylum seekers to travel to that territory safely.  It was inspired by something that I stumbled across during my DPhil research: in the early 1980s Australia developed ‘in-country’ refugee programs, in which Immigration would identify people who were at risk of persecution but still within their countries of origin, and Australian authorities would then carefully arrange for that person to flee across an international border and resettle in Australia. It is one of the most interesting stories in Australia’s refugee policy history – a very proactive, creative program. So I am building on this by studying how countries such as Canada, the United States and Italy have offered similar pathways. From January to June 2018 I’ll be a Fulbright scholar at Georgetown in Washington D.C., to learn more about U.S. ‘in-country’ programs.

4. What do you love about being an historian?

I love being immersed in the research process, spending days in the archives – through quiet discovery, slowly piecing the evidence together, then evaluating and re-evaluating this evidence along the way, sometimes overturning long-standing beliefs or conclusions. And I’ve come to love the second stage of this process, the ‘writing-up’; even though it is hard and time-consuming, it makes the research complete.

5. What’s the one aspect you find most challenging about being an ECR?

The need for self-reliance and self-confidence. While the ‘apprenticeship’ of a doctorate may appear to be over, the learning process continues, and figuring out where and how to pursue and to promote one’s research requires a lot of confidence. I’ve been incredibly lucky to be able to work within a talented team of scholars at the Kaldor Centre, and to be mentored by the very best people in my field – Professor Jane McAdam and Professor Guy S Goodwin-Gill.

6. What do you find most exciting?

The possibilities. As an ECR, I am no longer bound by the subject-matter of a doctoral thesis, but can pursue new lines of inquiry. As a historian working alongside legal scholars, I really appreciate the benefits of cross-disciplinary exchange, and to that end I established the Emerging Scholars Network, based at the Kaldor Centre. It is a community of emerging and early-career scholars working in a variety of academic disciplines but within the broad field of forced migration studies. Each year we hold a workshop to coincide with the Kaldor Centre conference.

7. If you could go back to any historical period, where would you go and why?

I recently spent two months as a Visiting Postdoctoral Fellow at the European University Institute in Florence. Seeing that progressive multilateralism in action was quite inspiring. As a result, I would choose to go back to witness the drafting process for the 1951 Refugee Convention, at which States built upon previous instruments and accepted obligations to people fleeing persecution. It is worth noting that as the sixth signatory to the treaty, Australia was the State that brought the Convention into force.