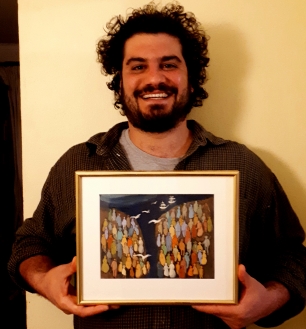 I am Andonis Piperoglou (some people call me Andoni/Αντώνη – it translates to Anthony in Greek). Please don’t confuse me with ‘Adonis’, for I am no modern day representation of classical antiquity. I’m twenty-nine years old, currently live in Canberra, and joined the AHA in 2011. This time last year I was anxiously waiting on my examiners reports, which, lucky for me, arrived in my inbox with a box ticked ‘without amendment or further examination’. I couldn’t believe it – in some ways I still can’t. I completed my dissertation at La Trobe University and was fortunate to have been mentored by a progressive group of La Trobeian historians. This year I have been teaching history at the Australian Catholic University in Strathfield, a cosy campus in Sydney’s inner west. Since graduating I have attended four conferences, engaged with a simulating cohort of Sydney-based historians, and submitted numerous job-applications and journal articles. I have also begun turning my thesis into a book – an exciting process! This is my, slightly politically charged, contribution to the AHA emerging historian series.

My thesis examined the identity preoccupations of Greeks in Australia between the 1890s and 1920s. Early Greek settlers in Australia are almost exclusively remembered as hard-working proprietors of oyster bars and restaurants – as settlers who were able to retain their cultural distinctiveness while assimilating into the Australian mainstream. In an effort to bring Greek and Australian history into closer conversation with each other, while drawing upon historical whiteness studies, I reinterpreted early Greek settlement away from the historical paradigm of migrant assimilation. Locating the self-representations of early Greek settlers’, I illustrated how Greeks asserted their identity as loyal Australians by using pre-existing notions of difference. Christian and civilisational particularism facilitated claims of respectability and whiteness, while historical ties between Britain and the making of modern Greece corresponded with Greek settlers’ assertions that they were good settler-colonial inclusions.

My PhD research was aided by academic research and teaching, community engagement projects, and the traumatic journey of intergenerational migrant self-discovery. I accessed archival collections across Australia, Greece, and the United States, and attended numerous conferences in Australian history, Modern Greek Studies, and histories of immigration and race. Throughout the process of writing I was acutely conscious that I wished to recast Greek-Australian history as part of the story of Australian race-making, while painting an image of the past that directly spoke to my own diasporic community.

Migrants matter. Histories of migrants, and the multiplicities of their identifications, matter, absolutely.

As a cultural myth, an idea that Greek values of true-grit, stubborn resilience, and hard work (often typified by long hours in the fish ‘n’ chip shop, in which my grandparents laboured for most of their working lives) lead to the socioeconomic mobility of Greeks in Australian society. The popular imagination commonly takes this historical (mis)truth as irrefutable. Doesn’t it reflect, many (often ageing Greek Australian men) argue, real heroic sacrifices to realize a degree of middle-class comfort out of marginalisation and poverty? Canonical historiography, both within academia and the ‘official’ Greek Australian community, organizes the telling of Greek Australia accordingly. I do not follow this fashion. I cannot. In my research, race enters the making of Greek Australia inescapably. We cannot speak of Greek Australia as a distinct ethnic group without examining the larger issues of belonging in the host society, in which race and class play key roles, not only historically but also in the present moment.

The encounter that Greeks had with Australian racial hierarchies in the early twentieth century and the ensuing negotiations to adopt, approve, ignore, remake, or in some cases challenge whiteness speaks volumes about the importance of race in Australia today. It also speaks to the constitutive role that notions of Hellenism had in the processes of Australian nation-building. Questions of race must be raised, and re-raised, because it allows us to understand how the social power of whiteness has shaped the experiences and histories of various people differently. Better historicising Greek-Australian identity formation, and any other migrant subjectivity for that matter, is necessary to complicate the simplistic claim that most migrant groups faced similar challenges. In my public encounters it has not been uncommon to hear the following historical narrative – the Chinese suffered, then the ‘wogs’ had it rough, followed by the Vietnamese, and now it’s the Muslims – such a narrative misrepresents the historical experience of migrant groups, muting their voices and under-valuing their histories. Understanding the specificities of how migrant groups, like Greeks, identified with the racialised nation may help us debunk this recurring historical tendency.

Enjoying the privileges of whiteness, Greek Australian lives today are largely unburdened by discriminatory practices. They are often spared, as a result, the emotional, psychological, and social encumbrance associated with the microaggressions and overt violence to which Indigenous, Asian, and Muslim peoples are subjected to daily. This privilege entangles Greek Australian lives with other people’s lives across an ethnically tainted, and historically blurred, political terrain. As citizens who have emotionally inherited past forms of stigmatization, Greek Australian’s may have an obligation to take a stand on racialised formed of hatred and intolerance. In making race a component of Greek Australian history, and attempting to recast Greek Australian history as part of the wider transnational Australian story, my research is politically tied to contemporary issues of racialisation and historical injustice. In short, my research matters because it allows us, as a historically engaged collective, to responsibly address and debate the heady global making of settler-colonial dispossession, and continued forms of racial expulsion and exclusion.

3. What are you researching now or intending to do next?

I am currently in the process of turning my thesis into a book manuscript which is occupying much of my time. I am passionate about achieving this milestone. I am also working on a co-authored article with Associate Professor Andrekos Varvana on the imperial career of Sir John Hamilton Goold-Adams. Goold-Adams’ career spanned the Orange River Colony (as Lieutenant-Governor and Governor), Cyprus (as High Commissioner), and Queensland (as Governor). We are hopeful that an investigation into his imperial career will provide us with a way to connect the divergent processes of British colonialism and settler-colonialism in south-central Africa, Cyprus, and Australia – three Anglo-imperial spheres that have previously been thought of as widely separated in space and time.

I have also begun a broader project on Philhellenism in the Anglophone world. I hope to land the financial funding required to explore how colonialist ideas about Hellenism and neoclassicism co-contributed to dispossessive processes of British imperialism and settler-colonial nationalism. Such a project would explore how notions of Greece became inscribed across indigenous landscapes, institutionalised within colonialist education systems and chambers of governance, and increasingly present in modern diets. On our supermarket shelves, for example, the choice of feta, haloumi, and yogurt are littered with classical symbols. A history waiting to be unpacked, sliced, diced, and eventually, devoured.

4. What do you love about being a historian?

Being a historian is splendid – for me it is a vocation that is tangled with a personal drive to make a better world. I see historical research, presentation, and writing as a creative political exercise. Being a historian is a process of artistic experimentation, based on interweaving my critical thinking and storytelling abilities with the sensible, and well-tested, craft of presenting the archival residue of the past as objectively as possible. I take great delight in finding historical connections and educating historically curious minds. I feel immense satisfaction when I am able to trace, map, link, and connect peoples and ideas across seemingly disparate locations and periods. Tying ones findings to the expansive realm of historical scholarship is a privilege – one that I, perhaps naively, but nonetheless thankfully, love unconditionally.

I also enjoy engaging with senior historians. Many historians have been forthcoming in sharing their own life experiences, career trajectories, and historical expertise. The encouragement and intellectual dialog that many well-established historians have shared with me has been an unexpected gift in my intellectual journey as a young career historian. A beautifully piercing historical intellect is something to be loved and treasured.

5. What’s the one aspect you find most challenging about being an ECR?

I think this question has been accurately addressed by previous contributors to this series. There is no doubt that casualization and the insecurity that it brings is extremely challenging – mentally, financially, and interpersonally. During my PhD I became acutely conscious of the sacrifices required to ‘make it’ in academia. With reality being what it is in the university sector, I think persistence and faithful confidence in ones work is crucial.

6. What do you find most exciting?

The ability to intellectually engage with the public. Earlier this year I was invited to give a presentation at National Gallery of Australia, at an exhibition called Defying Empire: 3rd National Indigenous Art Triennial. Drawing off some brilliant contemporary art installations, I was able to transfer my historical research off the page. This was an exhilarating cross-cultural and intergenerational experience.

I am also thrilled to be part of what I see as an Australian migration history renaissance.  Significant contributions to the field have come out in this year – recent book-length publications by Alexandra Dellios, Jayne Persian, and Claire Higgins, for example, are cementing migration and refugee stories into the broader Australian historical narrative. There are many more historians that are contributing to this rebirth and it is exciting. Who knows, maybe such a revival can spark the creation of a long overdue Journal of Australian Migration History?

7. If you could go back to any historical period, where would you go and why?

I am perpetually located within an array of historical pasts. Physically, mentally, emotionally. When I login to Facebook and I see my relatives in Cyprus I’m instantly taken to the migration experiences of my mother and her family – experiences that are loaded with an interplay of past and present nationalisms, conflict, and displacement. When I trek along the straight boulevards and backstreets of Melbourne’s inner north, I am transcended to a past where rough larrikins roamed, Chinese colonial merchants lived, and Jewish rabbis prayed. When I drive along the tree lined streets of the nation’s capital and spot a glimpse of the parliament’s modernist flag pole, I am reminded of a type of Australian nationalism that publicly flaunted itself during the bicentennial year. My mind quickly wonders to the encampment that is the Aboriginal Tent Embassy – a heavy reminder that history lives with us in the present and will ride with us into our futures. And, finally, when I dip my toes into the ocean, anywhere along the Australian coast line, I feel connected to a global system of currents and flows which fastens us to time scales that we are only beginning to comprehend.