It’s Friday, 21 December 2018, and here at the University of Wollongong the corridors are very quiet indeed. I have not seen anyone all day down my end of Building 19, a notorious rabbit warren where usually at least a few lost souls are wandering around hoping to find a printer, a kitchenette, a classroom, or maybe just a way out. Office doors are closed and locked (I assume; I haven’t been randomly testing doorhandles). The classroom opposite my office is, for once, quiet. The only person to make tea today in the kitchenette nearest me is, well, me—this entry is brought to you by my fourth pot for the day of T2’s Morning Red blend. 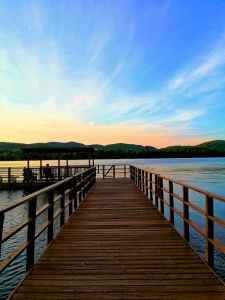 I guess everyone’s already down by the water?

So, clearly, people have already skedaddled for Christmas. But what does summer and the holiday season mean for ECRs, especially historians in Australia? I put out a call for comments on Twitter a couple of days ago and solicited a few more from colleagues not on that platform. I have not been able to name everyone personally, but all the responses on Twitter can be read through the preceding link.

Overwhelmingly, it appears that summer is writing season. If even half the ambitions expressed come to pass, there ought to be a bumper crop next year of journal articles from our emerging historians. Jillian Beard notes that her first summer post-thesis is a busy one, with two journal articles and a fellowship application on the go. For some, the writing projects are even larger, extending to book manuscripts. Ben Wilkie, our most recent Q&A participant, is one of them. Ana Stevenson, another Q&A veteran, also has a book on the go, but she highlights one of the challenges for historians with appointments in the Global South: the holiday season gives her the opportunity to read books inaccessible in South Africa.

We all have our rent and bills to pay—indeed, for those without the security of an ongoing contract, this is probably the overriding concern. Will there be tutoring work next semester? Will funding applications be approved? The stress and anxiety of wondering where the money comes from is acute for many at this time. So it is unsurprising that some respondents are only taking a few days off before returning to teaching summer courses, or have lined up contracts to perform research assistance (RA) over the holidays. Poor Mahsheed Ansari mentions that there is still marking to do! Chelsea Barnett, whose Q&A went live in September, has RA and admin work because, as she puts it, there is “No rest for the wicked… or for ECR academics, apparently.”  Speaking personally, before I began my (fixed-term) appointment here at Wollongong, I spent my summers at the University of Melbourne performing as much RA as possible. Let me tell you, being in the old Arts West, now replaced by an inferior modern showpiece, on New Year’s Eve was even more surreal than being in UOW Building 19 right now (somebody just walked past my office! What is happening!).

Summer, hopefully, is not all work. Many respondents have carved out at least some time to rest—”rest, rest, and rest”, as Kim Kemmis says. Anne Rees is spot on about the need to resist “academia’s busyness culture” because “good scholarship requires a fresh mind”. But Anne also highlights that the ability to take leave and refresh the mind is a privilege of employment that not all ECRs possess. For people with appointments such as mine or Anne’s, we can take leave if we want, knowing that we will still have income over summer. For casuals, this season is often a poor one: every day taken to recharge the batteries is a day’s pay foregone. It speaks poorly of the modern university that the demands for greater productivity are not coupled with the means for a large portion of the academic workforce to have the rest necessary to produce quality scholarship.

But enough critiquing the modern university; we will all keep doing that in 2019, no doubt. It appears that those of you who are taking time off—by whatever means you have managed to secure it—are really looking forward to some solid reading. More than one respondent remarked on the opportunity to read fiction as a startling novelty. Ben Wilkie quips that he will be “reading a fiction book for once”. Effie Karageorgos, another past Q&A contributor, is keen to sit down with some Agatha Christie. I have been waiting to read Claire Coleman’s novel Terra Nullius since October: I took it on a flight but spent the whole trip writing, and have not had another opportunity to pick it up until this week. I have just reached the twist, and I can say that this book is a treat.

I am not travelling for the first Christmas in years—I’ve talked some of my family into visiting me. But many of you are off to see family. Others have foreign holidays lined up. Hannah Loney, a historian in Melbourne who is not on Twitter, wrote to me to describe two glorious weeks in Indonesia: time to read, to swim in the ocean, and to enjoy good food and drink. And now she feels refreshed, able to take on journal article submissions, book proposals, and teaching preparation. She notes that although it’s not great to lack paid leave, one perk of casual appointments is being able to just book the tickets and go. Certainly when I was at Melbourne Uni I did similar, making trips to New Zealand during quiet periods of employment without needing permission from anyone. Having paid leave is a delight, something I scarcely believe I am entitled to after years of casual contracts, but the associated paperwork is not a thrill.

It would be remiss of me if I wrote this entry without dishing out some congratulations. You might recall the recent call for applications for the Australian Historical Association–Copyright Agency ECR Mentorship scheme. All the applications received were of high quality, attesting to considerable talent, insight, and ambition. The panel of judges were delighted to award the six mentorships to Jillian Beard, Margaret Cook, Nicholas Ferns, James Keating, Mia Martin Hobbs, and Ryan Strickler. Some of them gave comments in reply to the summer activities tweet—it sounds like they will soon be getting stuck into the articles funded under the mentorship. I, for one, am really looking forward to what they produce. With any luck I might be able to shine a spotlight on it during 2019 with this blog.

Speaking of this blog, if you are interested in participating, please get in touch. I want to hear from you whether you would like to do a Q&A (either the series for ECRs or that for established scholars), write a how-to guide, describe a book or other object that changed your life, or propose a new feature. A number of people have suggested that a series on Academics With Children would be welcome, so I am keen to hear from scholars at any stage of their career, with children of any age, who would like to discuss experiences and issues facing parents in the tertiary sector. I am also interested if any reasonably well established scholar would like to write a “how to survive your first academic conference” guide for our newest historians.

Contact me, André Brett, at abrett@uow.edu.au if you’re keen. 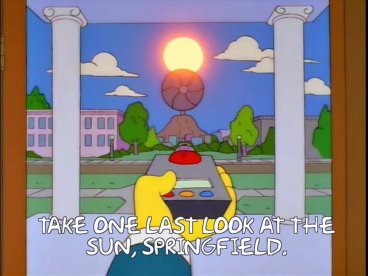 Honestly, Mr Burns was on to something if you ask me.

It might be the holiday season, but email now if you wish; you won’t get an out-of-office reply. I will only be taking off the public holidays because I actually like working through summer. Heat is unbearable, the sun is not my friend, and I did not become a historian to spend time outside. You will find me tapping away on grant applications, book manuscripts, and book reviews—but, as a sop to the season, I might be doing it from my desk at home with the pleasant hum of cricket on TV in the background. I like my office in Building 19, rabbit warren though it may be, but installing a television might be excessive.

All the best for the holiday season. Go crack open a beverage of your choice (a beer for me), grab a good book (because it seems that’s what all of you want to do), and settle down somewhere comfortable (even if it’s outside). See you in 2019!